Batty
I'm a librarian. I knit. I have more black clothing in my closet than most people.

I've been productive!  Now that I'm not taking classes, I have more time to knit.  And I'm finishing stuff!  These are Capitola socks, which I meant to knit two years ago and finally got done in November.  The yarn is Sunshine Yarns sock yarn, which is lovely.  The colors are beautiful, and it's soft.  Capitola may be my new go-to sock pattern, the fit is excellent. 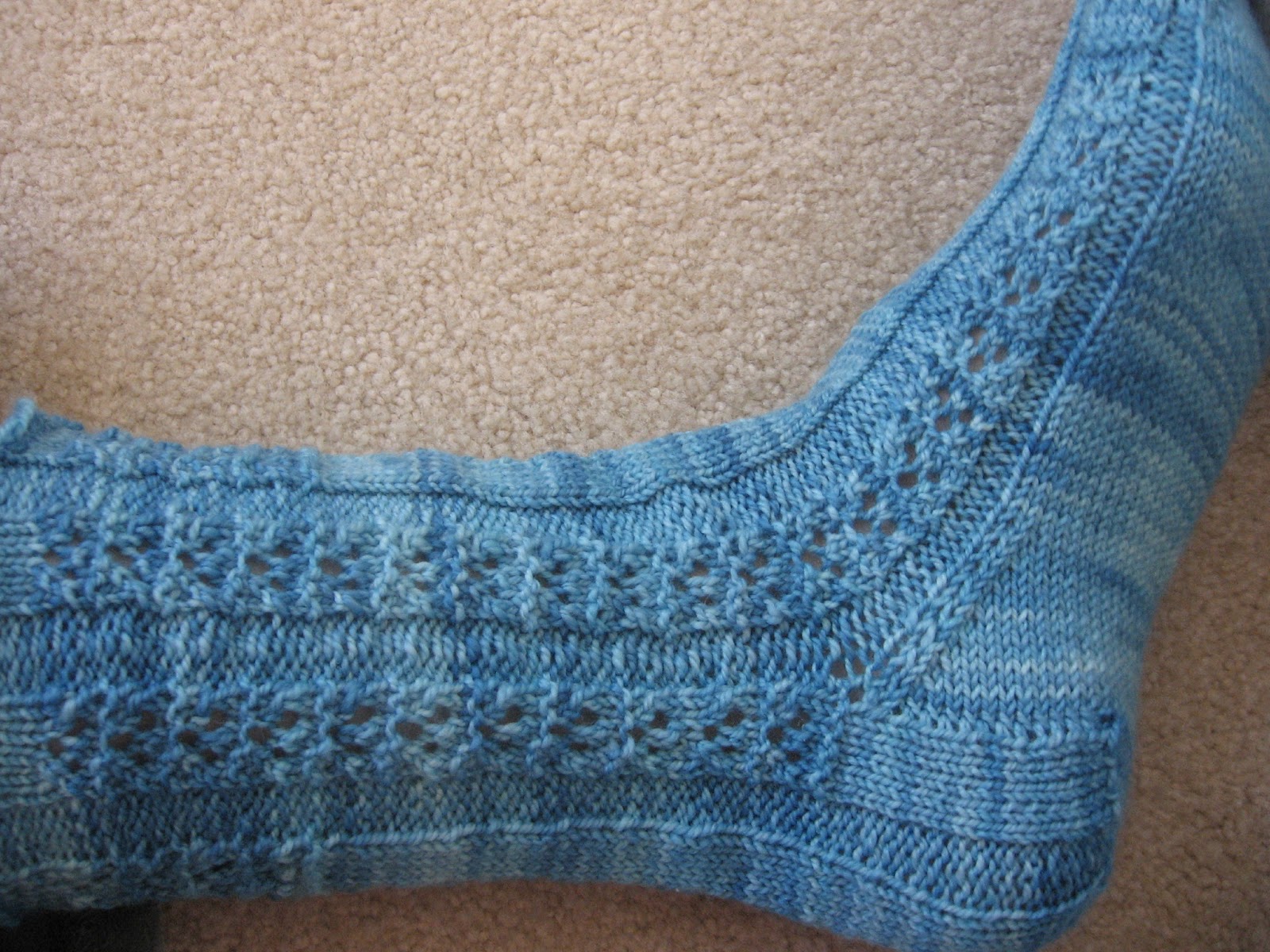 Here they are on my feet.  I'm coming to the conclusion that ribbed patterns are the only thing that stays up on my legs.  Everything else slouches down, no matter how much negative ease. 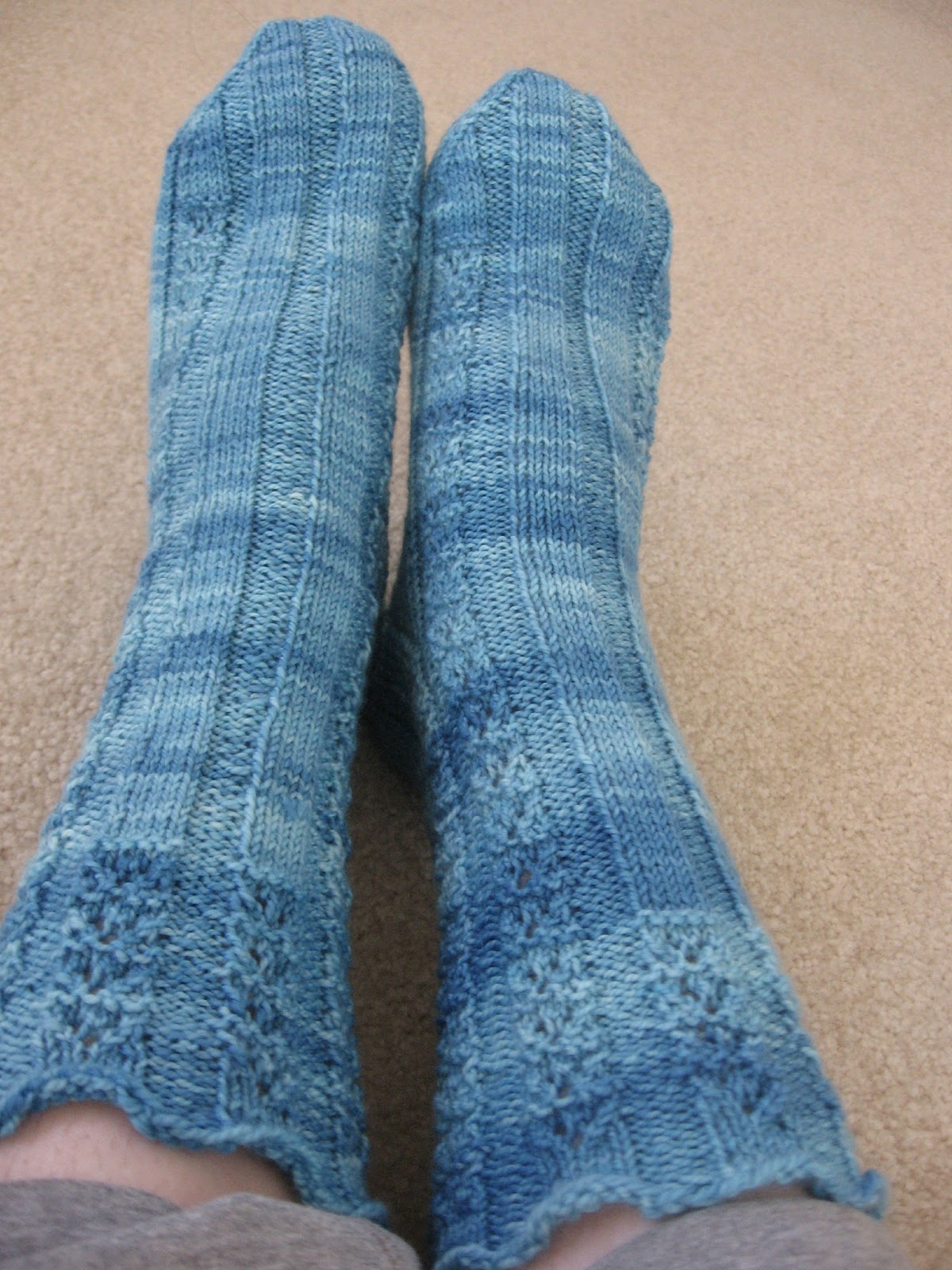 The other thing I'd been meaning to do for a while is practice my colorwork.  These are Crystal Socklets from knitty, made out of bunches of leftovers.  They're still wet.  Action shot to follow.   Comment on the Crystal Heel: if you have a very slender, short heel, you may need more than .5" of negative ease.  My heel doesn't quite fill out the Crystal heel.  Or, as an alternative, you could leave out a couple of rows between decreases. 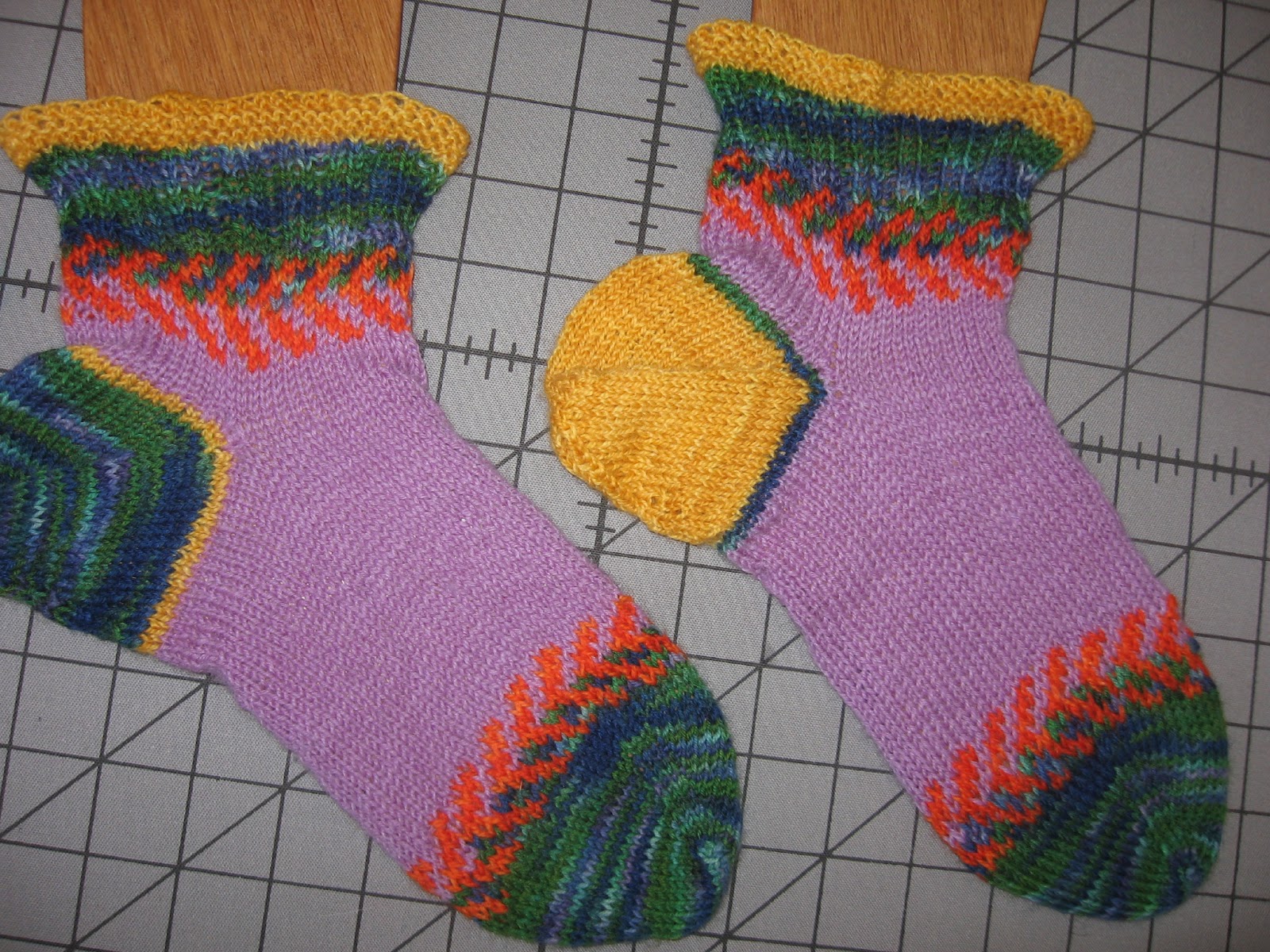 On the whole, these were fun.  I know they're all socks, but... I'm also knitting sweaters!  I know, me, sweaters.  They're not socks, but I'm enjoying the experience anyway.
Posted by Batty at Saturday, January 26, 2013 2 comments:

I've been knitting leftover socks.  When you have small feet like me, there are tons of leftovers.  I've wanted to work on my colorwork, so I picked out the Crystal Socks pattern from knitty, dug up my bag of leftovers, and got started.  Here's the sock so far.  Notice the little yarn balls below?  That's a set of stitch markers I unwrapped from a yarn ball full of little packages, courtesy of my partner in a ravelry swap.  The green thing is a container you can squeeze together and use to store the markers. 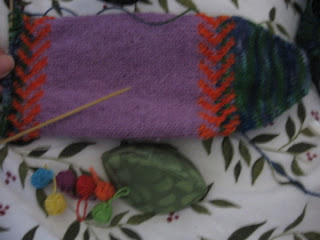 I also finished another shawl.  For some reason, I was scared of shawls, and then, I wasn't.  Now, I can't stop cranking them out.  This is Birch Dreaming Deep by Janel Laidman, knit in Dream in Color Starry.  I wish you could see the sparkles.  This yarn is seriously pretty. 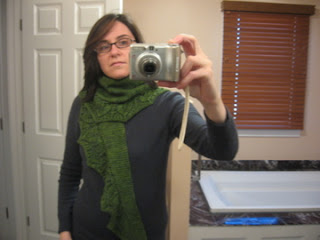 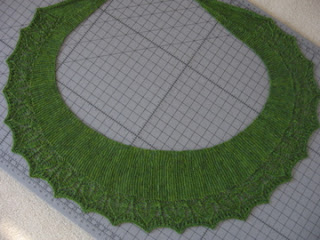 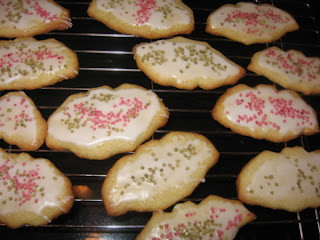 Christmas Bats, with sprinkles.  They are a tradition at our house, and they were very yummy.
Posted by Batty at Sunday, January 06, 2013 2 comments:

This year, I did not post any resolutions.  This year, I want to focus less on must-dos and need-to-dos and do-by-whens.  I am not a sponataneous person, and I do not expect to start living a completely unscheduled life.  But schedules get in the way of doing things because we want to be doing them, because it's what makes us happy at that moment.  I'm hoping to create more space for such moments.

In that sense, I hope you find 2013 to be full of joyful moments.  I hope it treats you kindly and brings you more happiness than pain.  Happy New Year!
Posted by Batty at Tuesday, January 01, 2013 No comments:

After much working and studying, we finally have some time off.  Time to knit, time to snuggle in front of the fireplace, and time to watch the cats go nuts in the tree.

I participated in a Christmas swap with some people on ravelry, and I received this lovely hand-dyed yarn.  It had little surprises wrapped up in it, and I don't know if it's the packages or the pattern that kept me knitting.  Either way, it was hard to stop.  This is Stephen West's Pogona, knit on US #6 needles.  It's blocking, action shots to follow. 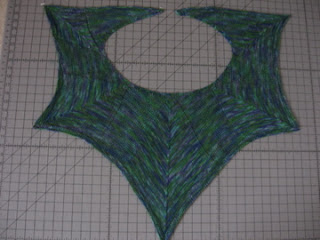 We got a white Christmas!  This is what I saw this mroning. Beautiful, isn't it?  We took a walk in the snow, stopped for coffee, then had waffles and little turkey sausages for breakfast. 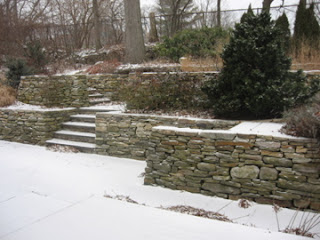 When we unwrapped our gifts, I found these hand-made bat ornaments.  My Mother-in-Law made them for me, and I immediately hung them up.  Yay, bats! 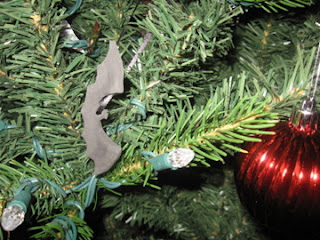 The tree is fake, but if you think that keeps the cats from chomping... well, you probably don't have cats, or you don't have cats with an oral fixation bad enough to make Freud exclaim, "Now zis is a prime example of failure to resolve conflict during ze oral stage of development!  Zese cats vill never be right because zey cannot do ze talk terapy."  And he would be right. 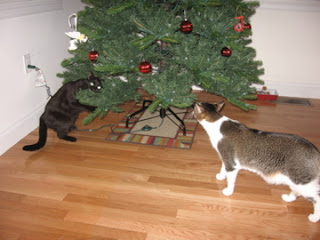 Now that my class is over, I have more time to knit.  The knitting mojo is back!  I'll try to post more regularly and share some of the FOs that have been piling up unphotographed.  In the meantime, Merry Christmas to all who celebrate.  I'm going to enjoy some quality flopping time, and then, the pie crust gets rolled out.  I may have overworked it.  We'll see.
Posted by Batty at Tuesday, December 25, 2012 2 comments:

It has been several months, and much has happened.  We have sold a condo, moved into rental housing for the transition, moved out of rental housing, and into our new place.  What a whirlwind the past few months have been!
I have a new computer.  My old blogroll is gone, I'll have to reassemble it little by little.  It will take time.  But I'm knitting again, spinning again, finally relaxed enough for some yarny pursuits.
And I have some catching up to do!

I knit some socks for my Dad.  Started last year, finished this year.  String Theory Caper Sock, one of my favorite sock yarns.  So squooshy, and the stitch definition is dreamy. 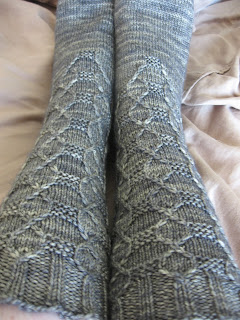 The pattern is Hex, which I got through the Cookie A sock club.  I forget if it was last year's or this year's, but I really enjoyed it. 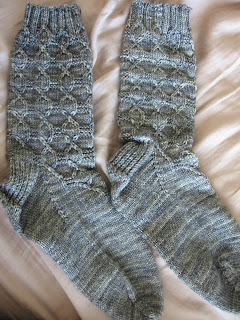 These were knit in Merlin the Cat sock yarn in the Zombie colorway.  Happy zombies if ever I've seen them.  These socks make me happy. 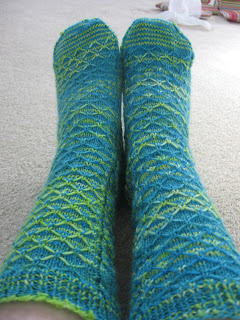 Next up: some non-sock projects.  There is also some secret knitting going on, what with the holidays approaching.  But I can't share those quite yet, sorry.
Posted by Batty at Saturday, October 20, 2012 2 comments:

This Blog is Not Dead

No, it isn't, even though I haven't posted in a month.  We are putting our condo on the market and hoping to move soon.  Getting ready for an open house is so much work, particularly when you have to pack most of your belongings to make the space look hip and minimalist.
And don't even mention the yarn.  Space bags, yarn, hours of sorting through stash and preparing it to go into storage.  That's right, my stash is in storage.  Protected from moths, I hope, and ready to come back out once we have sold this place and found a new one.
I have one bin of yarn, some fiber and my spinning wheel.  Let's see if I can knit/spin that down before we move.
Posted by Batty at Monday, April 30, 2012 1 comment:

I am baaaaack!
It's been a long couple of weeks, work-wise, but I have made it through preparation for business travel, a trip that involved being fed information via the garden hose method while sick and trying to get a prescription for antibiotics to Ohio (not easy when your doctor is in MA!). But now, I'm home, caught up on work, and I have time to knit.

I still haven't taken pictures of the sweater that's been finished for months, it's been unseasonably warm and I haven't wanted to put it on. I have some finished socks, however.

This is the closest to what the color looks like in person. Except it's even brighter. In your face green! 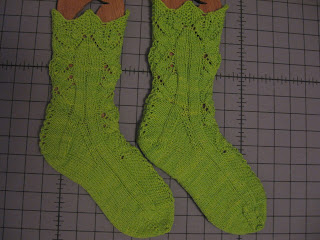 This is what they look like on the foot. 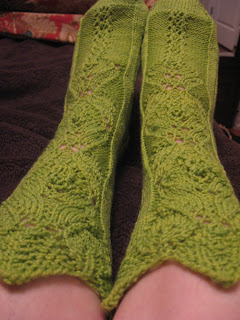 And they've got a fancy heel too. 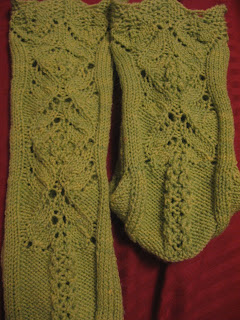 Details:
Pattern: Blathnat
Yarn: Koigu sock yarn
Needles: US #0
Comments: The color of the yarn is gorgeous, but there were quite a few inconsistencies in the spinning. Some spots looked really frayed, some looked underspun, and some were waaaay too thick. It worked out fine, but there were issues. 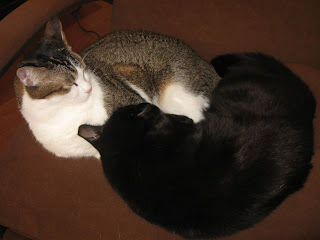